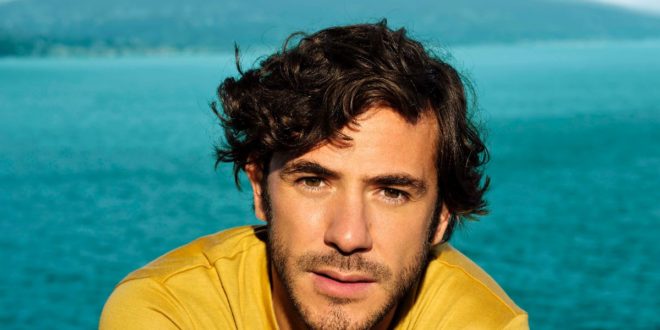 Jack Savoretti returns with a wonderful new album that arrives complete with its own genre, Europiana. Put on your dancing shoes for the funky first single, the disco fuelled ‘Who’s Hurting Who’, featuring Nile Rodgers.

“Nile brings groove, glamour and chic that is everything that Europiana is,” Jack Savoretti says. “’Europiana wouldn’t exist without Nile Rodgers!”

To celebrate, Jack has announced a 12 date UK tour next spring kicking off at the Plymouth Pavilions and finishing up at London’s Eventim Apollo. Tickets go on sale May 14th at 9am from HERE.

Europiana is the follow-up to Jack’s breakthrough 2019 album Singing to Strangers’ his third consecutive gold seller and first UK number one. While that album was recorded in Rome at Ennio Morricone’s studio, this new disc was conceived in between lockdowns at Jack’s Oxfordshire home.

“Europiana isn’t a sound. It’s references and inspirations and the emotions they evoke,” Jack says. “It’s the music of my childhood summers, remade for today.”

Much of the 11 track album concerns itself with family, friendship and the precarious nature of love so it’s not surprising that Jack’s wife and children sing on a few tracks.

“Singing to Strangers was my first album that wasn’t all about me, which I loved,” Jack says. “Europiana pushes that further. There are more characters and bigger concepts. I’m looking out at the world, not inwards.”

And what a view! There’s a confidence and an emotional swagger that drives these songs onto new heights. Jack has never been in better voice, turning in his best ever vocal performance on each and every track. And they were so lucky with the weather.

“For weeks we literally lived Europiana,” Jack enthuses. “The band would arrive and I’d make a big lunch, eaten outside with loads of rose. Then we’d go inside to write in what is usually my living room but it became a studio. The sun and fun seeped into the songs.”

You can hear that warm glow throughout Europiana. It’s the sound of blue skies and sunny days. No doubt it will be the soundtrack to the summer. Get ready to soak it up.

‘Europiana’ Tracklisting:
I Remember Us
Secret Life
Who’s Hurting Who
When You’re Lonely
More Than Ever
Too Much History
Dancing In The Living Room
Each And Every Moment
The Way You Said Goodbye
Calling Me Back To You
War Of Words 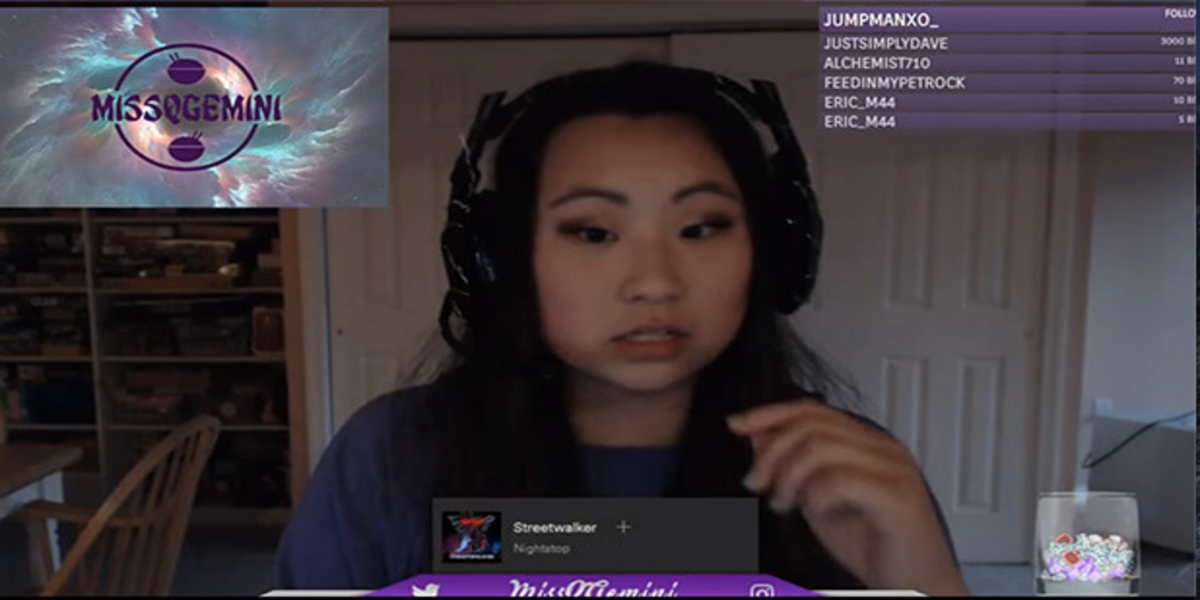 MissQGemini, a Twitch Streamer, is one of the most well-known players on the website. She was a well-known game professional with a large following. Because cheating is ingrained in video games, she encounters the same problem.

She was accused of video game cheating. Even though it is not illegal on most of the game’s platforms, it is among the worst things that anyone can comment about you on Twitch. She refused to accept the accusation of cheating while gaming. However, she is no longer available, raising the question of whether she was the one who cheated others in-game. Let us take a closer look at her, and all of her fans will be stunned.

What Exactly Happened To Begin With?

It is a felony to defraud someone. Many people have been found utilizing cheats on platforms like CS and GO. However, unlike MissQGemini cheating, who becomes a topic of conversation when discovered, they remain unknown.

It happened when she started a Twitch live stream with rage about being accused of cheating because she is a woman. She began playing again after harshly complaining that this was foolishness. In one of her recording sessions, it was apparent that she was reloading a profile that exposed the other gamers on the other side of the room right away.

She immediately noticed that other people were watching her while she was broadcasting live and playing continuously. Everyone could see the ruse she pulls. To conceal the situation, she begins asking individuals if they have experienced this type of issue, mentioning that her friend Rock had had it earlier and that she is now experiencing it.

She then blamed another acquaintance, Clara, who had already been banned for using cheats. Clara had been on her gaming computer earlier in the day, she claimed.

She was giving flimsy reasons, accusing her friends, and concocting conspiracy theories. However, she was caught red-handed since her life was being watched. All of her deceptions had failed, and she was perplexed by what was happening to her. She is unable to escape the situation.

Finally, she exits the game by signing out of her account. She disappeared from the stream after this incident. Numerous folks were joking around about her and her teachings, calling her a cheater. She cannot stand being called a cheater, which could be why she is being grounded.

Nobody can make you do anything nice or evil unless you want to. We are sure “Clara” did not push MissQGemini to hack while playing these games and broadcast on Twitch in the case of Haley.

She was accidentally captured, which was awful for her. No one tries to appear to be a cheater, which is why we are writing.

There is a doubt about where she is present. Nobody knows, but once all of Haley’s attention-getting tactics backfired, she may have sought assistance. A negative impact on your life can prove to be problematic for your life and your image.

Ukrainian officials say Russian forces have launched an all-out assault on the Azovstal steelworks, the last Ukrainian holdout in the city of Mariupol.

Ukrainian forces inside the plant have been fighting “difficult bloody battles” for a second day, the commander of the Azov regiment said.

Russian forces are reported to have entered “the territory of the plant” after days of sustained attacks.

About 200 civilians are believed to be sheltering inside, including children.

The BBC has not been able to verify the reports of the Russian attack on the steel plant.

In a brief video message posted on Telegram, Azov commander Denis Prokopenko said: “I am proud of my soldiers who are making superhuman efforts to contain the pressure of the enemy… the situation is extremely difficult.”

President Volodymyr Zelensky has made a further appeal to the UN to help save the lives of those who remain there.

“Everyone is important to us. We ask for your help in saving them,” Mr Zelensky told UN Secretary General Antonio Guterres in a phone call.

The Ukrainian leader thanked Mr Guterres for a successful UN and Red Cross-led evacuation this week, which rescued more than 100 people from the steelworks, but called on the UN to “assist in the removal of all the wounded from Azovstal”.

There were also more evacuations from other areas – Ukraine’s deputy prime minister said that 344 evacuees from various south-western cities including Mariupol arrived in the relative safety of Zaporizhzhia on Wednesday – a south-eastern city still under Ukrainian control.

In a post on Telegram, Irina Vereshchuk thanked the UN and Red Cross for their help, saying: “These are women, children and elderly people from Mariupol, Manhush, Berdiansk, Tokmak and Vasylivka… We will now support them during this difficult time, including with much-needed psychological support.”

“While this second evacuation of civilians from areas in Mariupol and beyond is significant, much more must be done to make sure all civilians caught up in fighting can leave, in the direction they wish,” she said in a statement.

Russia has said it will implement a ceasefire from Thursday to allow more civilian evacuations from the Azovstal plant.

During this time, Russian forces will cease activities and withdraw units to a safe distance, the military said in a post online.

Meanwhile, new analysis suggests many as 600 people were killed when Russia bombed a theatre in Mariupol in March. The attack is believed to have caused the worst known loss of life in a single strike since the invasion began.

An investigation by the Associated Press (AP) news agency now puts the death toll at about double the previous estimate of 300. AP spoke to 23 survivors, rescuers and those familiar with the theatre’s use as a bomb shelter.

Russian troops have spent weeks besieging and bombarding Mariupol, which is key to Moscow’s military campaign in Ukraine.

Full control of the city would give the Russians a land bridge from Russia, through parts of the Donbas region held by Russian-backed separatists, right through to Crimea, which Russia annexed in 2014.

Despite indications that Russia is making slow progress in its effort to invade and retain southern and eastern parts of the country, the Kremlin has dismissed speculation that it will declare all-out war in Ukraine in the coming days as “nonsense”.

Moscow has up until now denied it is at war, instead referring to the invasion as a “special military operation”.

But Western officials have speculated that President Vladimir Putin could use the 9 May Victory Parade to announce an escalation of military action. Moscow has denied this. 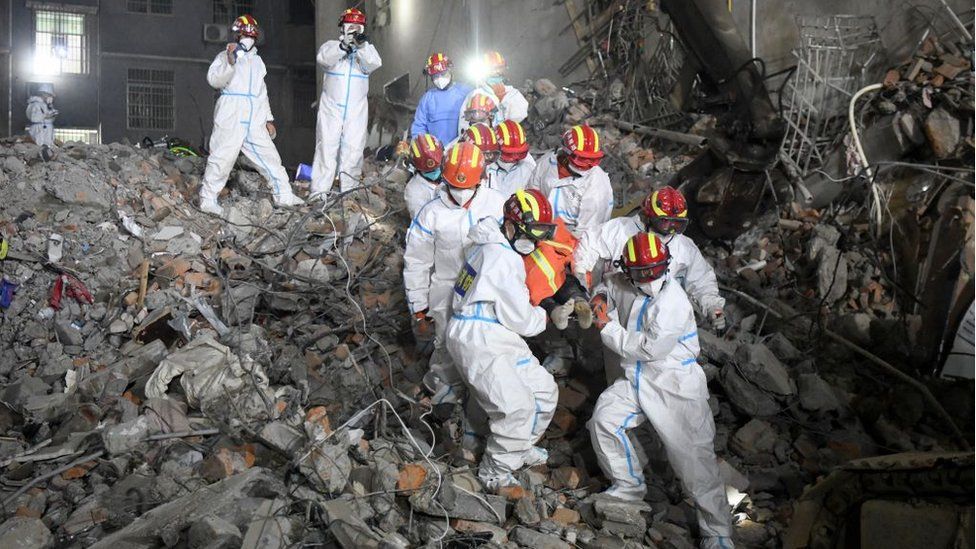 Rescuers in the central Chinese city of Changsha have pulled a woman alive from the rubble of a six-storey building six days after it collapsed.

She was conscious during her extraction just after midnight (16:00 GMT Wednesday) and advised rescuers how to bring her out safely, state media say.

Ten people are known to have survived but the death toll rose from five to 26 after more bodies were found.

Arrests have been made as the building’s safety is investigated.

Weak safety and construction standards, along with corruption among local officials, have led to a number of building collapses in China.

Rescuers in Changsha used traditional methods to detect signs of life – shouting, knocking and sniffer dogs – as well as drones.

The survivor brought out early on Thursday had spent about 132 hours trapped in the debris.

Another woman who was rescued after 88 hours has described how she kept herself alive by rationing drinking water and staying warm.

The unnamed 21-year-old was in bed when the rear of the building, which contained flats and businesses, caved in last Friday afternoon.

She fell four floors but the walls did not completely collapse and formed a triangle above her head, the Global Times reports.

Half a pot of water was crucial to her survival. There was so little of it she only drank one sip at a time, and some remained even by the time she was rescued. To keep warm, she wrapped herself in a quilt.

Her mobile phone lost signal after the disaster but she used it to keep track of the date and time, conserving the life of the battery so carefully that it was still working when she was found.

She used a hard object to knock on the wall next to her to signal for help. “I did not knock when I heard the noise outside, but I knocked regularly when I felt that the rescuers were close or it was quiet outside and I soon got a response,” she said.

The story of the “Changsha girl” has inspired people across China, where the collapse of the building has been one of the most trending stories on social media platform Sina Weibo.

Chinese President Xi Jinping ordered both an all-out rescue effort and a thorough investigation into the disaster.

At least nine people have been arrested. Four were charged with causing a major liability accident and five were accused of providing false documents.