The BMW Alpina B5 Touring G31 is not really new anymore, but the title of the fastest station wagon at the Geneva Motor Show in 2019 is still guaranteed to be the fast 5-series variant. The Allgäu answer to the consistent lack of an M5 Touring presents itself in Geneva in traditional Alpinagrün, with rims in the Classic Design and with golden decor stickers.

The 608-hp power station wagon is always equipped with four-wheel drive, which allows him an impressive acceleration from a standstill: After just 3.7 seconds, the 100 km / h mark – so he is two tenths slower than the sedan moves but still in a highly exclusive environment. And with 800 Newton meters of torque it is clear that the BMW Alpina B5 also does intermediate sprints with extreme sovereignty. 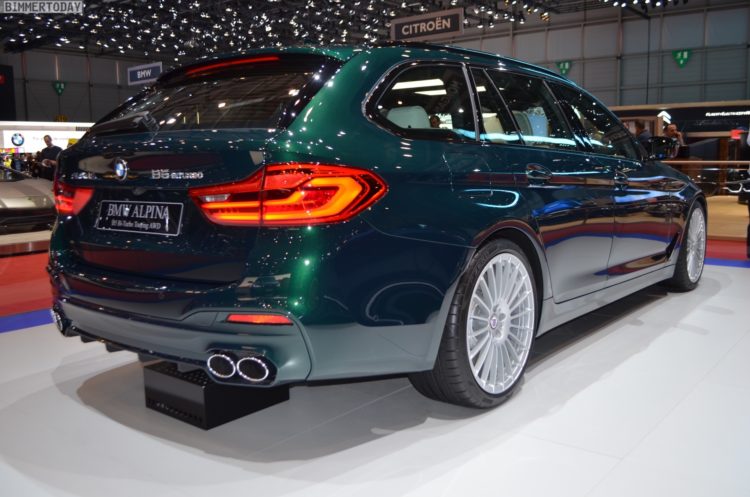 Even more exclusive is the environment in terms of top speed, because here shows the BMW Alpina B5 Touring G31 almost all vehicles from mass production its spacious combination rear. While other car makers brakes electronically at 250 or at least just over 300 km / h, Alpina leaves the B5 Touring unbridled off the leash. The result is an impressive top speed of 322 km / h! The fact that the sedan can still create eight more kilometers per hour, Touring customers should easily get over.

More important is that the BMW Alpina B5 Touring also has real estate qualities: With a braked towing capacity of up to 2,000 kilograms, it is also on the other side of the large boot for so many transport task, on which you could not even think with other sports cars , Measured by the wide range of applications, the price is also absolutely understandable: In Germany, B5 Touring customers must transfer at least 115,300 euros to Buchloe.